With the holiday season upon us, many people will visit salons to be pampered and have their nails done. Once a place of luxury for elite women only, US nail salons were democratized in the 1980s when new immigrants and refugees opened salons to a wider clientele. However, lower prices came at a cost to nail salon workers.

In November 2018, the UCLA Labor Center in partnership with the California Healthy Nail Salon Collaborative released Nail Files, a report on the national nail salon sector. While a few studies on the industry have focused on customer health and environmental issues, this report takes a comprehensive look into the multibillion-dollar nail salon industry through a labor lens. We analyzed existing literature, policy reports, and government data to paint a picture of current labor conditions for salon workers.

The majority of nail salons are immigrant-owned mom-and-pop establishments. More than two-thirds of nail salons have five employees or fewer. While there are some large national and regional chains, since immigrant and refugee women transformed the industry in the 1980s, mom-and-pop salons have dominated the sector. The labor force is predominantly Asian—Vietnamese, Korean, Chinese, Nepali, and Tibetan—but also includes Latinx workers. California, Texas, Florida, New York, and Georgia are the states with the largest population of nail salon workers. 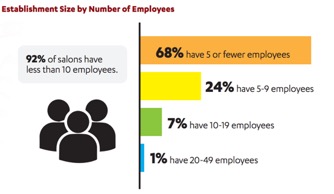 Eight out of ten nail salon employees are low-wage workers, more than double the national rate for low-wage work of 33%. Strikingly, full-time salon workers earn less than half of what workers make in other sectors. 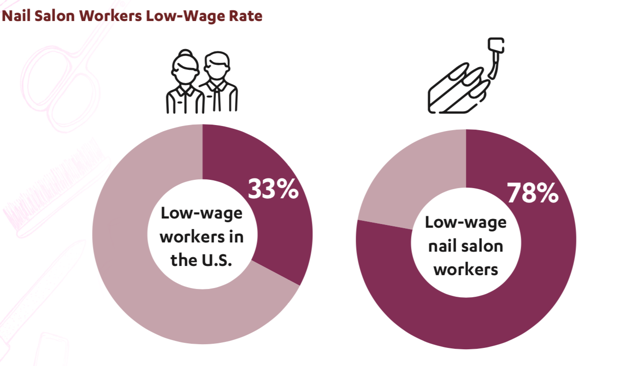 Nail salon workers experience challenging work conditions, including misclassification. These challenges include low wages, low flat-rate pay that amounts to less than the hourly minimum wage, other minimum-wage and overtime violations, and harassment and surveillance. In addition, 30% of nail salon workers are self-employed, a rate triple the national average, raising the concern that some manicurists are purposely misclassified as independent contractors and are therefore deprived of workplace benefits like health insurance and workers compensation, labor protections, and the right to organize.

What can be done?

The nail salon industry is projected to grow, and it will to continue to innovate to bring in a new clientele. Current trends include extending services to a male clientele using advertising and décor aimed at attracting men, expanding the sector with luxury and chain salons, and developing on-demand and app-based services.

As the sector expands, we recommend improved enforcement of workplace protections, best-practice training that encourages high-road businesses, customer education about fair pricing, and stronger government policies to protect the health and safety of nail salon workers.

Preeti Sharma is a UCLA PhD candidate in gender studies and a graduate student researcher at the UCLA Labor Center. Her research interests include feminist theories of work, racialized and gendered labor, service economies, worker center organizing, women-of-color feminisms/queer-of-color critique, and Asian American studies. Her project “The Thread between Them” explores South Asian threading salons in the Los Angeles beauty-service industry and the neoliberal immigrant-service sector.

Saba Waheed is research director at the UCLA Labor Center. She has fifteen years of research experience developing projects with strong community participation. With her team at the Labor Center, she coordinated the first-ever study of domestic-work employers, launched a study of young people in the service economy, and conducted research on the taxi, garment, nail salon, construction, and restaurant industries.

A first-generation student, Vina Nguyen graduated from UCLA in 2018 with a BA in human biology and society. As a graduate student researcher at the UCLA Labor Center, she investigated current trends and labor issues in the US nail salon industry and the impact of erratic scheduling practices on the lives of retail workers in Los Angeles. She continues her research with the Multicenter Aids Cohort Study, a thirty-year study of HIV infection in gay and bisexual men.