On November 25th, students enrolled in a course offered through UCLA’s Labor Studies Program participated in an annual lecture focusing on the principles of social change and nonviolence featuring Reverend James Lawson Jr. and Senator Maria Elena Durazo. The lecture formed part of the newly established Lawson Legacy project, a project that will host an annual nonviolence lecture and award student scholarships to students who demonstrate a commitment to continue the legacy of nonviolent social justice work.

During the lecture, Reverend Lawson shared the struggles of nonviolence that he has been through as an American activist and leader within the Civil Rights Movement. He recognized the extent to which nonviolence struggles are “ancient” and tend to be forgotten over time. He explained that the first labor strike that happened in Egypt in 1170 was never recorded nor normally taught in public schools or universities. Reverend Lawson revealed that Los Angeles was also an “anti-labor organization” until recently when there are 300 unions and over 800,000 people in these unions.

Reverend Lawson also discussed the power of students in leading UCLA to become the “founding university for DACA” (Deferred Action for Childhood Arrivals). He believes that DACA was a gift from the students and not a gift from the congress of the United States or state government. “No one is undocumented,” stated Reverend Lawson. “Creation [is] power that we of the human race have never seriously tapped,” he added while referring to Mahatma Gandhi as a role model and “father of the science of the nonviolence struggle.”

Towards the end of his speech, Reverend Lawson shared a story of his childhood memory. In Ohio 1932, he lived in a neighborhood where racism was prevalent despite unsegregated schools. When he was eight years old, he remembers “smacking” a white American friend for calling him a “vicious racist epithet.” Now, Reverend Lawson says “love is a far more powerful force than hate” and also a better way to deal with racism and prejudice. Reverend Lawson ended with a final note that we ought to give nonviolence theory practice and struggle a serious hearing.

Abel Valenzuela, professor at UCLA, introduced the State Senator Maria Elena Durazo who has not only impacted the city of Los Angeles, but also thousands of workers over 30 years. Durazo began her speech by acknowledging and thanking all the people who have helped and worked with her to where she is now. 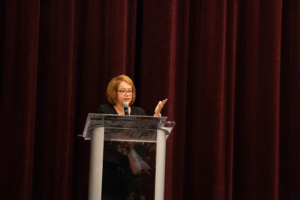 Maria Elena Durazo revealed that her dream to become a nonviolent activist was influenced by her childhood experience. Her parents and older sisters were immigrant workers that were paid “crappy” wages and were violated of basic human needs including clean water, shade, and shelter. Durazo said “it was a dream come true” for her to become an organizer in Los Angeles and to work with strong, hard working men and women.

When Durazo joined and became a full time organizer in Local 11, she realized that 75% of the members were Spanish speakers. She realized that these members were not wanted there and she did not agree with that. Along with Miguel Contreras, the first person of color to run this organization and her husband, they started to realize that this issue was not just a fight for raises in wages, but dignity, self-worth, and identity issues.

Durazo acknowledged Reverend James Laswon for teaming up with the union to help teach these members to be more organized and teach them strategies on an industry and city wide level. In addition to this, the most important thing that was taught was the ability to organize and train the men and women individually. This event included a powerful spoken word performance by Alejandro Juarez who delivered his message on the power of students in social change and acknowledged the student organizations at UCLA that helped with the event which are SLAP, ASU and HSU.

The lecture ended with individual speeches by the three recipients of the UCLA Lawson Legacy Scholarship who showed their gratitude towards their professors and passion towards the topic of nonviolence.

For more information about the event and DACA, please visit: https://www.ilrc.org/daca. 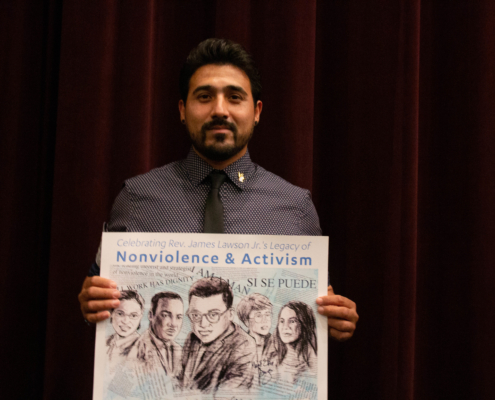 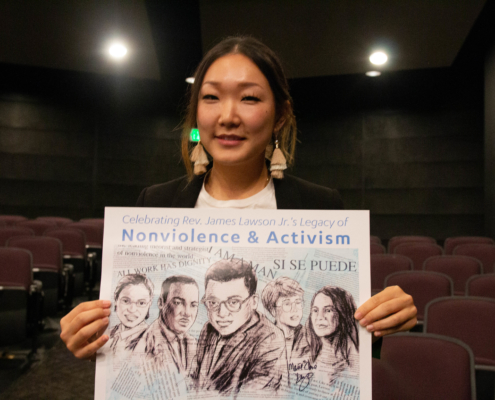 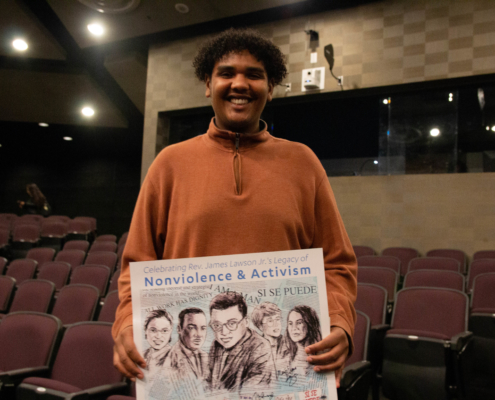