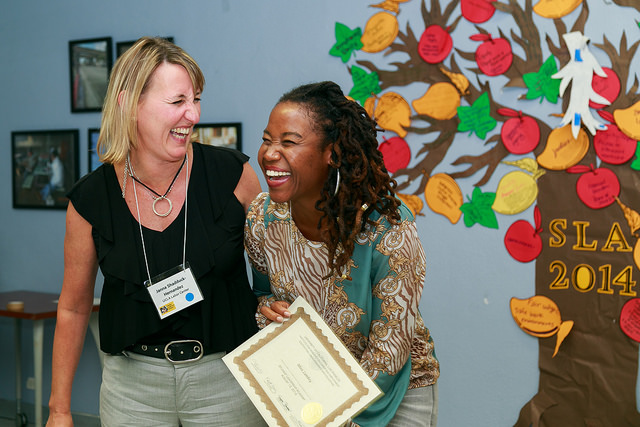 Project Director Janna Shadduck-Hernandez with Student Leadership Academy intern Rhea Lambey. Lambey spoke at the graduation about her summer working at the National Day Laborer Organizing Network. Read more about the program on the UCLA Newsroom.

This year 15 interns completed the Student Leadership Academy (SLA) internship program. SLA is 8 week full-time paid internship program, sponsored by the Institute for Research on Labor and Employment and the UCLA Labor Center.  The program places recent university graduates into different social justice organizations and labor unions in Southern California. Many graduates go on to pursue careers in public service and organizing in Los Angeles and across the country.

Liliana Leon, who graduated from UCLA in June, worked this summer with the United Food and Commercial Workers union. She summed up some of what she has learned. “It makes you realize that at the core of so many workers’ stories is that they just want respect,” she said. Many of the grocery workers she spoke with are seeking basic improvements in their lives such as a pay raise, paid sick leave and the freedom to voice their opinions.

Check out Liliana’s full story on the UCLA Newsroom!

Liliana Leon, who graduated from UCLA in June, worked this summer with the United Food and Commercial Workers union. Read about her summer experience.

Graduates gathered at the UCLA Labor Center on August 13, 2014 to celebrate the summer’s accomplishments. Rigo Valdes, Director of Organizing and Vice President of the United Food and Commercial Workers spoke to the graduates about labor movement struggles and the hope for young organizers.

“There are very few internship programs of this kind nationally,” said Elizbeth Espinoza, student programming coordinator at the UCLA Labor Center. “It is a program that focuses on the practical skills of working a full-time job, but it also nurtures the next generation of labor and community leaders.”