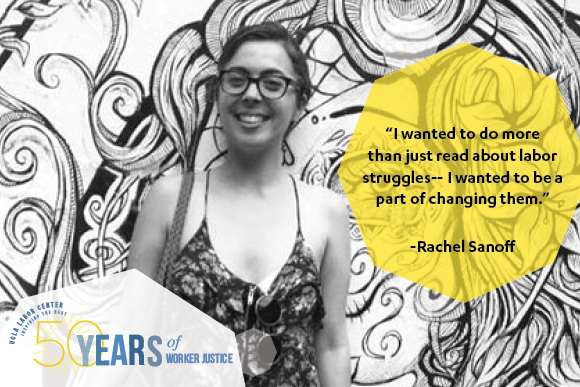 “There were so many struggles in the labor movement I read about in articles and research papers,” says Rachel Sanoff, UCLA graduate and alumnus of the Student Leadership Academy. “But I wanted to do more than just read about them– I wanted to be a part of changing them.”

Student Leadership Academy (SLA) is a leadership development and training program that gives university and college students, as well as recent graduates, in-depth, career experience as leaders and organizers in the Los Angeles labor movement. The program includes a two-day training along with an eight-week paid summer internship.

Before joining this program, Rachel had a first hand experience with wage theft at a coffee shop when her boss threatened to withhold her paycheck when she called in sick. Her decision to pursue an education in labor issues was due in part to growing up in a household where her father was part of a union. She witnessed the difference this made in her family’s life. At UCLA, she organized with student-worker campus groups, and decided to become a Labor & Workplace Studies minor.

Through the Student Leadership Academy, Rachel spent her summer with the Workforce and Economic Development Program of the California Labor Federation.  Here primary assignment was research, but she also had the chance to experience different parts of the labor movement across Southern California. She walked picket lines outside of Parkview Hospital in Riverside with overworked and underpaid UNAC/UHCP nurses, stood outside of the Apple Store in Pasadena in solidarity with Silicon Valley security officers, and listened to Taylor Farms workers courageously speak through tears about the extreme abuse, pain, and physical danger they suffer bagging the vegetables we buy at our local grocery stores.

The defining moment for Rachel was the first time she worked in the field. During her internship training, she joined UFCW for a surprise picket at the large Mexican-owned grocery chain, El Super. At one point, one of the store’s workers approached the manager face-to-face to describe all of the abuses he suffered on the job.  Two managers with arms crossed blocked the entrance with an intimidating authority. Despite this, the worker stepped forward and spoke of the hardships he, other El Super workers, and their families had endured–wage theft, retaliation, lack of sick days. With a crowd of people standing behind him, he demanded changes, and explained that they would continue to fight for their rights, and they would win.

“Witnessing this blew my mind,” says Rachel. “I saw that because the worker had the support of a community and a union literally standing behind him. He could voice his concerns without fear. In those few minutes, he could speak truth to power and worry about what would happen next. I thought to myself, isn’t that how our world should operate?”