Bargaining for the Common Good: An Analysis of the Los Angeles Teachers’ Strike

Thirty-four thousand Los Angeles teachers launched a six-day strike from January 14 to 22, 2019, impacting five hundred thousand students and their families. On February 22, the UCLA Labor Center hosted a public educational forum with United Teachers Los Angeles (UTLA) President Alex Caputo-Pearl and Secretary/Chief Negotiator Arlene Inouye to examine key lessons from the strike and the implications for the future of the labor movement and public education. Some of the critical takeaways include the importance of collective teacher organizing and action to build power; building long-term authentic partnerships with parents, students, and community organizations; and increasing the capacity of the union at every stage to utilize a strike as a powerful nonviolent tool for change. 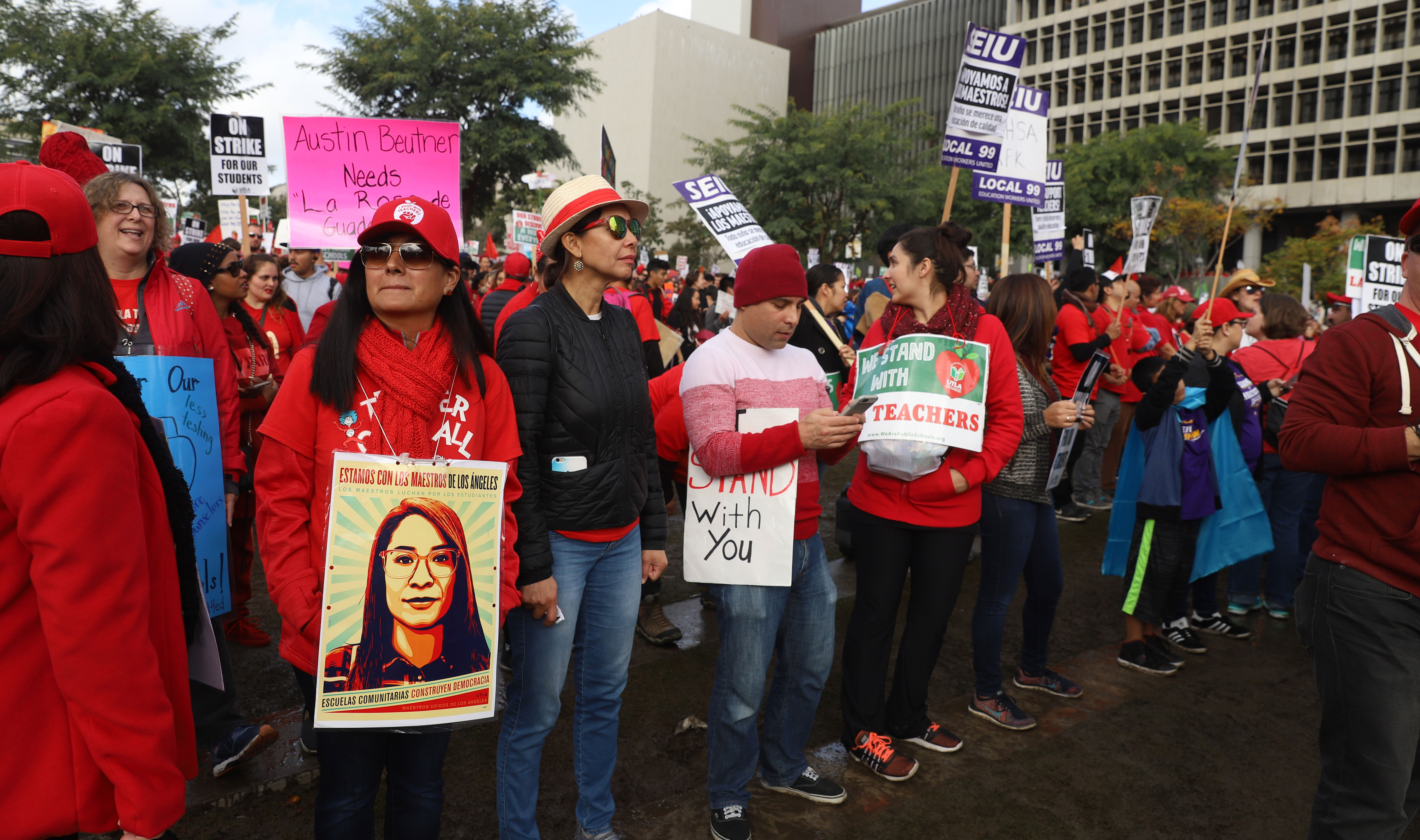 UTLA approached negotiations with the Los Angeles Unified School District (LAUSD) from a framework focused on “bargaining for the common good,” which resulted in contract provisions that expand green space at schools, limit random searches of students that have a racially disparate impact, and support immigrant students and families. In addition, the teachers won a 6 percent wage increase, class size reduction, and increased staffing with more on-site nurses, librarians, and counselors.

Moreover, UTLA’s strategic organizing approach led to a thousand new union members—this, after the US Supreme Court Janus decision, which forces public employee unions to negotiate on behalf of all bargaining unit members but prohibits unions from collecting “fair-share” fees from those who do not choose to be union members. UTLA’s organizing victory highlights the potential of the labor movement to organize and build power even in a post-Janus world.

The focus of the first teachers’ strike in Los Angeles in thirty years was not on wages and benefits but on quality public education. Teachers were protesting the defunding of public schools, class sizes of forty to forty-five students per teacher, and the critical lack of essential school personnel, including nurses, librarians, and counselors. Forty years ago, California ranked number one in the nation in per pupil funding; today, California is forty-third in per pupil funding and forty-eighth in classroom size, even though the state has the fifth largest economy in the world. The decline in public schools has a disproportionate impact on people of color and the poor; ninety percent of LA public school students are racial minorities, and 72 percent qualify for reduced-cost lunch programs.

The defunding of our schools is no accident. Since the passage of Proposition 13 in 1978, which limited taxes on real estate, billions of dollars have been transferred from public coffers to the largest corporate landowners in California. In addition, billions have been siphoned away from public schools to the growing number of private charter schools. National corporations supporting the charter school movement invested millions to elect a pro-charter majority to the LAUSD board, who in turn hired Austin Beutner as LA superintendent, a hedge fund multimillionaire with no experience in public education.

The impact of UTLA’s successful strike continues to resonate. Inspired by Los Angeles, teachers in Oakland and Denver have since gone on strike. The LAUSD school board voted to support a moratorium on future charter schools. And next year, a ballot initiative scheduled for the November election that if passed would curtail the impact of Proposition 13 and restore funds to California public schools.

Betty Hung is the staff director for the UCLA Labor Center. She previously directed the employment law unit at the Legal Aid Foundation of Los Angeles and, as the policy director at Asian Americans Advancing Justice-LA, cofounded the multiracial College for All Coalition. She is the cochair of Clergy and Laity United for Economic Justice and also serves on the boards of the Economic Roundtable and CLEAN Car Wash Worker Center.

Kent Wong is the director of the UCLA Labor Center, where he teaches courses in labor studies and Asian American studies. He previously served as staff attorney for the Service Employees International Union. He was the founding president of the Asian Pacific American Labor Alliance and of the United Association for Labor Education and currently is vice president of the California Federation of Teachers.