A Salute to All Essential and Frontline Workers on Labor Day 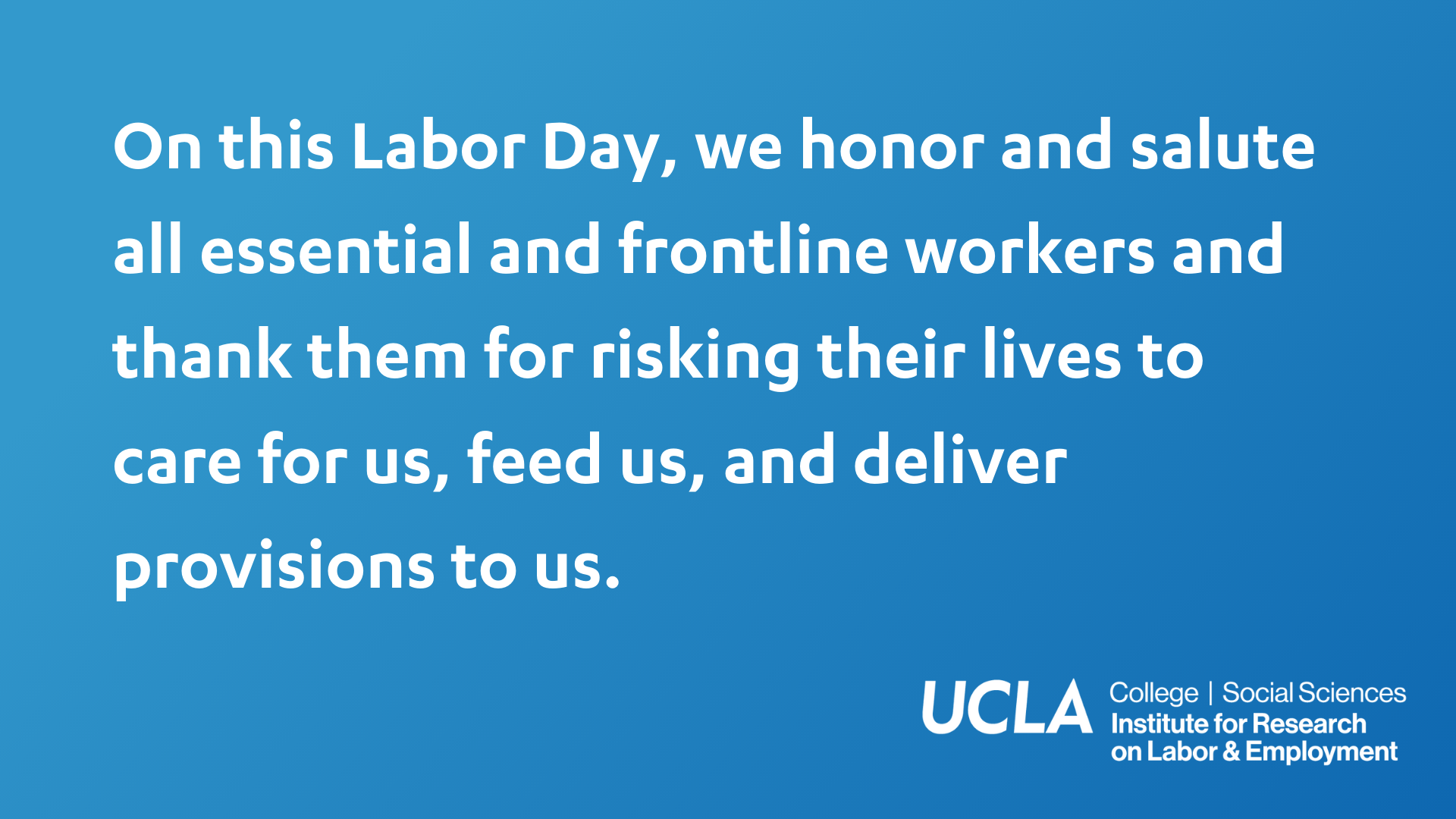 Though Labor Day in the United States was originally intended to honor working people and organized labor, it has become little more than a marker of the end of summer. But this year feels different. Labor Day arrives as our country struggles with the triple pandemics of COVID-19, massive unemployment, and systemic and institutional racism. The inequalities revealed by COVID-19 have been with us for a long time but are rarely acknowledged by those in power. On this Labor Day, we honor and salute all essential and frontline workers and thank them for risking their lives to care for us, feed us, and deliver provisions to us.

Labor Day emerged from the struggles of organized workers in the 19th century to limit the length of the work day. Workers went on strike and marched, demanding “eight hours for work, eight hours for rest, and eight hours for what we will.” It would be 50 years from the strikes of the 1880s until the Fair Labor Standards Act of 1938 made the eight-hour day a legal norm, mandated time-and-a-half for overtime work, and created a federal minimum wage. Along with the paid holidays often won by a union contract, these policies were the fruit of a struggle between workers and employers over that most precious of commodities: time.

Last week, when professional athletes refused to work to protest the shooting of Jacob Blake in Wisconsin, they joined that long history of collective struggle for justice. Players generate billions of dollars in profit for team owners and television networks, but they didn’t strike for more money. They demanded that owners use their influence to “push for meaningful and sustainable change” and promote voting access and “economic empowerment in the Black community.” Maybe this is a sign of things to come? As sportswriter Dave Zirin asked, “If the NBA can shut down in protest of racist police violence, why not other industries? Why not cities? Why not entire sectors of the country’s economy.” Part of the answer is that most workers lack the power of NBA players who are highly paid and benefit from a strong union with a legally enforceable collective bargaining agreement. Still, the players’ bold action may inspire others to build the kind of power that can win what workers desperately need—higher wages, paid health care, paid time off—but also a just and equitable society for all as we face the slow and painful process of economic recovery.

Will the post-COVID economy bring real recovery and opportunity for all, including immigrant, Black, young, and other vulnerable workers? As individuals, each of us has a role to play in answering that question. As an organization, the Institute for Research on Labor and Employment conducts research to improve the lives of these and other working people and their families, educates the next generation of social movement leaders, and works with allies to make UCLA an engine of social good. As we look toward the most consequential fall season of our lifetimes, we embrace those who bravely stand up for justice, celebrate those who work frontline jobs, and recommit our time and energy to building a better future.

Abel Valenzuela Jr. is director of the UCLA Institute for Research on Labor and Employment, Special Advisor to the Chancellor on Immigration Policy, and professor of Chicano studies and urban planning. He is the author of several research articles, books and reports on demography and population studies, immigrant labor markets, immigrant settlements and urban economies. His work has helped frame numerous national public policy narratives concerning immigrants in America’s workforce.

Tobias Higbie teaches classes on U.S. History, labor and social movement history, labor studies, and digital humanities/history. He is Associate Director of the Institute for Research on Labor & Employment and faculty chair of the Labor Studies undergraduate program. Higbie’s most recent book, Labor’s Mind: a History of Working-Class Intellectual Life (University of Illinois Press, 2019) is a social and cultural history of working-class readers and workers’ education in the U.S. during the early 20th century.

Entertainment and Media Research Initiative director @DrAnaChristina spoke with @latimes about the progress being m… t.co/mHDiDiLHwa

📢 TODAY at 3PM! Join us, @UCLA_CILP, and CA undocumented student leaders across CA for a teach-in on the… t.co/GVJILihfYG