Resilience and ambition: Labor studies grads reflect on community and shared aspirations for the future

This story is part of our 2021 Labor Studies Graduation Stories series. This story highlights the stories of three labor studies graduates who were nominated to speak at our virtual ceremony.

As a year like no other comes to a close, three graduating labor studies students have their sights set on an optimistic future.

Meagan Lord, Montserrat Hernandez-Garcia, and Emily Luong were three of the five nominees for graduation speaker at this year’s commencement. While each of their stories are unique, these students share a similar mission of engaging with and supporting workers in their communities.

Lord, a non-traditional student from Utah, said she came to UCLA planning to be a global studies student. But after taking two labor studies classes, the material convinced her she wanted to be a labor studies major instead. 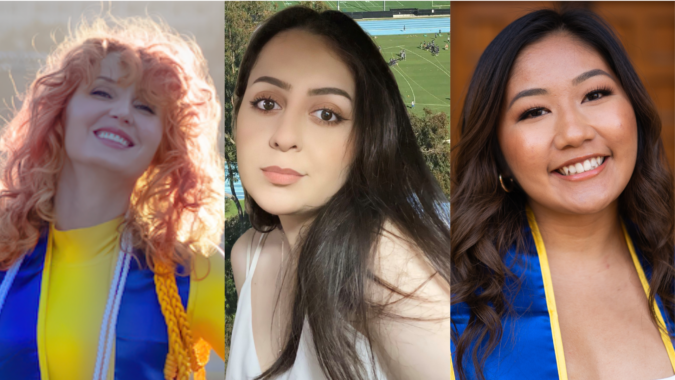 Class of 2021 labor studies graduates form part of a cohort aiming to change labor conditions for the better.

“I went and spoke to Gloria Chan about where my feelings were at and I decided right there in her office that I wanted to be a labor studies major,” Lord said. “I felt a deep connection to the history of working-class movements and began to recognize myself as a part of that movement. My experience just really resonated with what I was learning.”

After the COVID-19 campus shutdown, Lord said she found company and support through the students in her class and weekly coffee chats professors were holding. Lord also participated in the Labor Summer Research Program (LSRP), working alongside Saba Waheed, research director at the UCLA Labor Center, to study the conditions of workers and learners in Los Angeles. In a post-graduation future, Lord said she wants to continue working in the labor studies field, applying her knowledge and skills to help organizations within the area.

“I loved the research,” Lord said. “I loved the surveys, the interviews, analyzing the data – I loved every bit of it, and when an opportunity came up to continue working with that research and disseminating the information, I jumped at it.”

The second nominee, Emily Luong, grew up with her mother, a public school teacher, repeatedly dealing with union contract negotiations every few years. Her upbringing led her to consider adding the labor studies minor on top of her communication major and history minor. After taking professor and Labor Studies Chair Toby Higbie’s class on American working-class movements, he persuaded her to explore the program, she said.

“I would go to his office hours and we would discuss how my family’s experiences intersect with the field of labor studies,” she said. “I just fell in love with the department, with the program, and with the classes I was able to take.”

Luong said there are few Asian American leaders within the field, another class within the labor studies program introduced her to a professor whom she calls her mentor. In Law, Organizing, & Role of Lawyers in Social Movements, Luong met Professor and IRLE Project Director Betty Hung. Not only did Hung teach Luong, but she said that Hung and her course shaped her future plans for herself and her career.

In particular, Luong said she hopes to work to dismantle the carceral system and become involved with Asian prisoner support communities. For Luong, reminding herself of how much she values her community and family helped push her through to the end of her undergraduate experience.

Originally from Mexico, nominee Monserrat Hernandez-Garcia is set to graduate with a triple major in political science, Chicano and Chicana studies, and labor studies. Although she began as a political science major, her search for a curriculum that represented people of color led her to explore the labor studies program.

Learning about how different people – immigrants, civil rights activists, people of color – changed labor movements was a highlight of the program for her, she said. One stand-out class was Neoliberalism, Social Justice, and Community Organizing, where Hernandez-Garcia learned about systems of inequality, politics, and economics. The material was especially important to her coming from a working-class family, and she said she saw stories like her family’s represented.

“It was really nice to learn about the labor movements and the impact that [people of color and immigrants] have had,” she said.

Hernandez-Garcia was also motivated by her family to finish her years at UCLA in stride. Although she considered dropping out during her first year, Hernandez-Garcia said she is now a role model to her young nieces and nephews, showing them that they can attend college one day, too.

“I’m the first one of three children to go to college,” she said. “My dad only got to third grade in school, and my mom went to high school. They’ve been really supportive and I think that’s the main thing that’s made me finish.”

Post-graduation, Hernandez-Garcia said she plans to take a step back before deciding which career path to pursue. But ultimately, she has her sights set on either public policy and urban planning, or attending law school and working in immigration law.

Overall, each of the three nominees said they found a community of support within the labor studies program, especially during the difficult year behind them. As each graduate embarks on their own path moving forward, they remain part of a cohort of students aiming to change labor conditions for the better.