This story is part of our IRLE Engaged Learning Series. This series highlights the experiences of students connected to IRLE and their contributions within both our own units and local community organizations.

For Karely Amaya Rios, fighting for immigrant rights is both a professional and a personal passion. A fourth year at UCLA double majoring in political science and Chicana/o and Central American studies, minoring in public affairs, Rios has been a dedicated immigrants rights activist throughout her time at UCLA.

This past summer, Rios brought that activist experience to the Dream Summer fellowship and its inaugural UC Cohort. 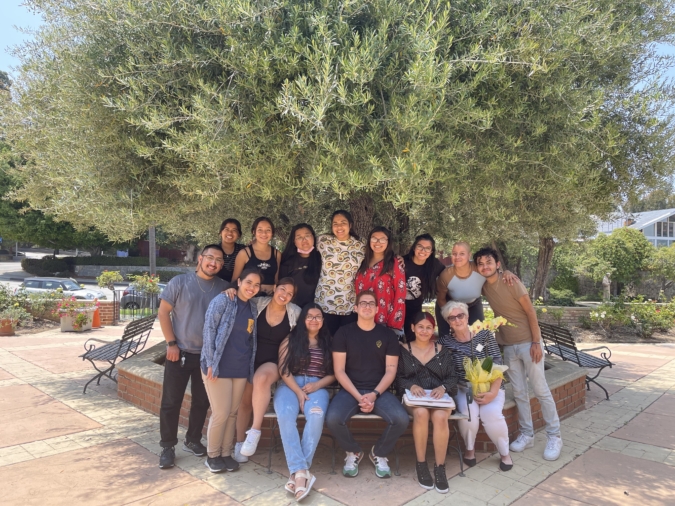 “Karely is a visionary and a passionate leader that continues to play a critical role in lifting up the voices of immigrant youth. She alongside Abraham Cruz, envisioned what a UC wide cohort of undocumented students would look like that will build the power and leadership of undocumented youth while moving a pro-immigrant agenda. Without her leadership, the UC Cohort wouldn’t have been possible nor would it have been so successful. She truly is an inspiring leader,” said UCLA Dream Resource Center Director Anthony Ng.

Prior to joining Dream Summer, Rios has been serving as the co-chair of Improving Dreams, Equity, Access and Success at UCLA (IDEAS), a student-led organization focused on advocating for rights, resources, and retention of undocumented students at UCLA and beyond.

Rios shared details of her Dream Summer fellowship experience below:

Can you tell me a little bit about the Dream Summer fellowship and the UC cohort?

My Dream Summer fellowship was life-changing. This was the inaugural year of the UC cohort. The UC cohort was built of six UC campuses, two students per campus. We had UC Riverside, UC Davis, UC Irvine, UC Berkeley, UC Merced, and UCLA. It was a group of undergrads and two graduate students who joined forces to advocate and create a network of students across the UC to organize for undocumented student resources. The vision of this network is to eventually be able to extend it to community colleges, CSUs and private schools. From the UC Cohort, we built a organization called Undocumented Student-Led Network which we’ll be launching this fall.

Usually when students join during summer, they get paired with an organization. So instead of getting paired with an organization, the organization was basically my co-leader, Abraham, and I. It was the first cohort run by students, for students, which was really cool. We were able to cater and create the work plan to what we thought was urgent and needed to be addressed. Having autonomy over our summer as undocumented students and be compensated for that work does not exist in many places. Dream summer offers that unique experience for the empowerment of undocumented students, this should be a model that should be replicated across the U.S.

What was your role in the UC cohort?

It was kind of a supervisor/facilitator role. So Abraham and I led it together. We oversaw the 14 students in the cohort. We did one-on-ones with all the fellows, followed up with them, and made sure the work was done. We had a vision of how we wanted the summer to go and the community we wanted to build. But of course when the fellows came in they overexcelled. They took the workplan and the vision and brought it to life, ran with it, and expanded it even more.

One of the events the UC Cohort held was the Immigration Reform town hall. Can you tell me a little bit about that?

The immigration town hall was awesome. Basically, the UC cohort was split into three teams. We had our organizing team, our communications team, and our policy team who was the one that hosted the town hall. Their role in the summer was to follow immigration policy and give the cohort policy briefs. Together, they were then able to build a project which was called Immigration Reform Now! and they invited Senator Alex Padilla, U.S. Representative Jimmy Gomez, and Councilmember Gil Cedillo. The town hall was to inform the community and urge congress that immigration reform has to happen now and that immigration has to be at the forefront.

What was a typical week for you as a Dream Summer Fellow?

We met Mondays, Wednesdays, and Fridays with the entire cohort. On Mondays we went over the work plan and what we wanted to get done for the week. On Wednesdays we had check-ins. On Fridays we had round-ups where each subgroup presented the work that they did and what they were looking forward to the next week.

My co-leader Abraham and I met with each fellow every week, and we had one-on-ones with them for 30 minutes to catch up, to help them in any way they needed, facilitate information, help them with research, get their thoughts together, as well as build relationships and ask how they were doing.

We also planned little community engagement activities such as fun game nights or movie nights. We had a retreat in-person and my role was planning how that was going to look. The retreat was in-person. We stayed at the UCLA Luskin Center for three days, two nights. The retreat was towards the beginning of the fellowship. We were able to bond and I think when you’re organizing you need to feel comfortable with each other and really feel at home. The retreat really helped in that aspect.

How has Dream Summer and the UC Cohort shaped your future endeavors?

The UC Cohort equipped me to be a better leader. I’ve been the co-chair of IDEAS since my sophomore year and leading a team is not an easy feat. Dream Summer gave Abraham and I the tools, access, and resources necessary for a student organizer to thrive. Honestly, coming into my senior year, Dream Summer really allowed me to think ahead and plan ahead. Now we’re setting up work plans for IDEAS and doing one-on-ones to build community and accountability within our organization. I plan to take the skills I learned this past summer into my future career as an immigration attorney.

And for a broader political question, what would be your wish for future immigration policies?

My wish is that undocumented people won’t be a token justified by their labor but recognized for their humanity. A lot of us are advocating for immigration reform and I think when advocating for that some people are left out. My vision and my hope in the future is for everyone to be included and that citizenship for all will mean citizenship for all. My vision and hope is for the immigrant community to be recognized for their humanity and to be accepted, embraced, loved, and equipped to succeed, because we’re all deserving of that no matter our status.

Do you have any last thoughts?

I’m really excited about the work that we did this summer. As I mentioned before, we started this organization called the Undocumented Student-Led Network, and we’re going to continue working this year with the Labor Center to really establish it. There’s a website and an Instagram. I think the vision of it is having students across the state and hopefully later on across the country advocating and seeking resources on their campuses and their states.