Reggie Myles shares his experience as a Freedom Fellow and his passion for Black worker justice. 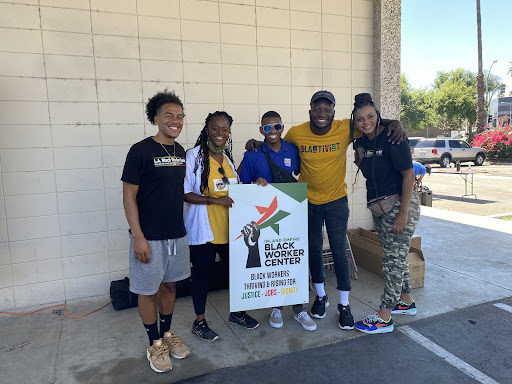 Myles at Inland Empire Black Worker Center at community resource fair in San Bernardino, August 2021.
This story is part of our IRLE Engaged Learning Series. This series highlights the experiences of students connected to IRLE and their contributions within both our own units and local community organizations.

Born and raised in the city of Pasadena, Reggie Myles is a third year undergraduate student at UCLA double majoring in sociology and African American studies. He is an aspiring organizer and his passion and interests in Black worker justice revolves around the importance of investing in not only Black families, but also Black futures.

Witnessing job, housing and food security disparities in his own community, Reggie learned that Black worker justice is not only about economic justice but also the dignity and humanity of Black workers.

This past year, Reggie enrolled in a “We Gon’ Be Alright: Developing the Next Generation of Black Organizers” course to learn more about Black worker justice. During the summer, Reggie applied the skills he learned from the course through UCLA Center for the Advancement of Racial Equity (CARE) at Work’s 10-week Freedom Fellowship.

Launched in Summer 2021, the Freedom Fellowship offers an experiential learning opportunity which aims to build a bridge between students and labor leaders, union members and field organizers in partnership with the Southern California Black Worker Hub and CARE at Work’s regional Black Worker Center (BWC) allies.

“I’m proud of the way Reggie has grown as an organizer. He has brought a lot of tenacity and energy and positive vibes to our space and we’re really grateful for that,” said Ron Collins, senior campaign coordinator at the Los Angeles Black Worker Center.

Read below for Reggie’s experience as a “We Gon’ Be Alright” student and Freedom Fellow for the Los Angeles Black Worker Center (LABWC).

What was your experience like participating in the We Gon’ Be Alright Class?

My experience in the class was truly transformational and empowering. The ability to learn not only the history of Black labor movements, but its significance and impact spoke to me and my family’s experience and resilience in navigating a system of racial capitalism and anti-Blackness.

In addition, the classroom space allowed Black and Brown students to engage in material through innovative learning styles such as reflections and Black worker interview projects. When entering the course, I didn’t know there was a specific Black labor movement, or at least I was unable to identify it. From this classroom space, no matter your stage or experience in organizing and Black labor movements, there was a community oriented space and support system that helped the development and learning at any stage. I especially loved the mental wellness exercises in the course and the importance of bringing radical self-care into organizing spaces.

I learned the traditions and sciences of organizing such as community mapping, how to create and execute a community rap, the socio-political landscape of Black L.A., and what Black worker justice means in the realms of policy and organizing campaign movements. I was able to take and develop tangible skills such as critical thinking and historical analysis to not only create strategizing around Black worker justice, but [also] leadership. Moreover, the guest speakers in the course dropped gems and advice that empowered and grounded my passion of Black and economic justice. Through the final research paper for the course, I was able to interview Black workers in my community and the disparities they faced in the pandemics of COVID-19 and racism. This allowed me to understand the world of social investigation in the organizing world and to contribute to a state funded project that gave me confidence and agency of justice. 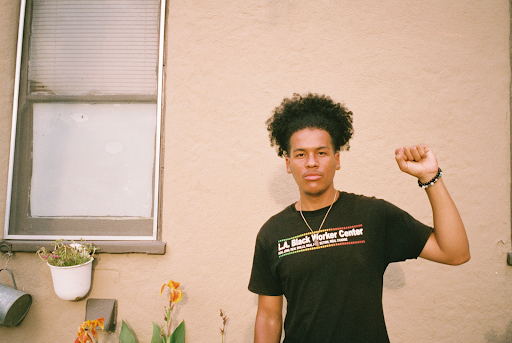 As I was able to learn about current Black labor movement strategies and campaigns in real time, the class challenged and uprooted my ability to conduct research and understand the historical context of policy change and organizing for system changing justice. I was challenged in my vision and perspective on Black power building. When I became aware and educated on campaign development and intentionality, my approach to organizing shifted socially and politically. Lastly, in the realm of solution building and strategizing, I had come to a realization that the power, solutions, and justice in organizing is with the community, rather than a service of organizing for them.

“CARE at Work offered the foundation and knowledge to not only see myself in this field of passion work and a life-changing career, but systemic change and Black liberation.”

What was your experience transitioning from the class to the fellowship?

My experience transitioning from the class to the fellowship was smooth and trouble-free. The fellowship orientation curated guest speakers, organizer tools and knowledge that instilled a sense of preparedness and confidence when getting acclimated with my Black Worker Center campaign and objectives. Through the orientation and meetings with CARE at Work coordinators and mentors, I was able to bring up questions and concerns that were addressed through workshops and seminars.

CARE at Work offered the opportunity of intentional workshops, presentations, guest speakers and tools that allowed me to build and add on to a knowledge base, not just from the We Gon’ Be Alright course, but [also from] my experience. It prepared me for an organizing career path that offered hands-on actual preparation and experience. Some folks and even myself, thought organizing for social and economic justice for Black communities was intangible, but CARE at Work offered the foundation and knowledge to not only see myself in this field of passion work and a life-changing career, but systemic change and Black liberation.

What was your experience with the Freedom Fellowship like?

It was such a fulfilling and joyful experience! My freedom fellowship project, 1000 Strong Campaign and the March on Crenshaw, was a balance of phone banking, 1:1’s with community members, outreach and engagement, and fellowship tasks.

At first, learning how to engage Black workers through the BWC’s Community Rap was challenging, but as I practiced and understood the cues of how to thoughtfully engage workers, I was able to develop connections and empower folks to join our labor movement work. As a canvasser doing community outreach in South L.A., LABWC created a truly rewarding experience where I got to learn the stories of Black workers, build 1:1 relationships, and further broaden my organizer skillset.

“To be part of such a legacy of Black Labor organizing has radicalized me to continue this work beyond the fellowship.”

Expanding my organizing perspective, this opportunity gave me the chance to not only strengthen an existing campaign but to also mobilize our people to win the fight for Black worker justice. It felt so meaningful to talk to community members where I learned that real solutions are ever-present. Also, being in rooms and spaces of community advocacy and campaign development allowed me to further build out my critical understanding and organizing curiosity for the well-thought out planning and intentions that go into grassroots change and the upliftment of the Black community. To me, those spaces were so powerful and inspiring to see every detail and possibility on the table for a campaign and the transformative process that followed. To be part of such a legacy of Black Labor organizing has radicalized me to continue this work beyond the fellowship.

How has the Freedom Fellowship helped you grow?

From the trainings at LABWC, I learned the importance of mobilizing community members and meeting people where they are. My perspective has broadened in understanding that outreach and recruitment [are] what keep a movement alive and add perspective into the strategizing and building.

I learned on a personal level how passionate I am in Black labor organizing work and I’m so grateful for the experience, especially in making connections with staff and other organizers. Most importantly, I learned the art and science of traditional organizing such as knowing how to execute, design and build campaigns.

When starting the fellowship, my supervisor told me that the work would transform me, and this Freedom Fellowship experience truly has– in ways I could only imagine. My experience at the Los Angeles Black Worker Center has allowed me to lead by passion and hit the iceberg, becoming a future revolutionary and Black Organizer for the Next Generation. To me, change is ever-present in the dedication and commitment that grounds us in our organizing work and a purposeful journey. One that includes faith. One that includes transformative justice, and one that includes building Black power. 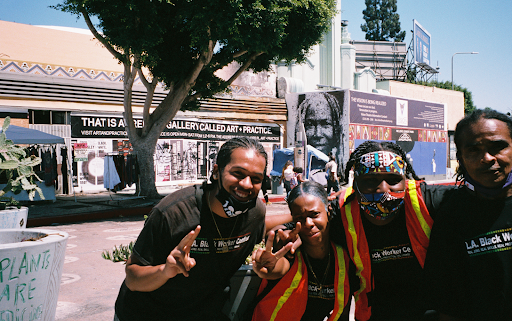 Myles with LABWC community members at March on Crenshaw for Jobs and Freedom on August 2021.

What are your plans after completing the Freedom Fellowship?

I will be entering into my 3rd year college preparatory program that helps Black students in LAUSD and PUSD get into college. In addition, I will continue Black Labor Movement work and organize with the LABWC and become a member. I plan on entering the non-profit industry, specifically organizing and fighting for social and economic justice in Black communities. From this, I hope to create systems and campaigns that will address the needs and disparities in Black communities, while developing a future of Black self-determination and holistic equality.

The 2022 Freedom Fellowship beginning in July 2022 will be offered exclusively to students who have taken We Gone Be Alright: Developing the Next Generation of Black Worker Organizers. We Gon’ Be Alright is a joint UCLA Labor Studies and LACCD Course (UC Transferable) that will focus on the tenets of hands-on community organizing and aims to give students an in-depth look at the historical and modern efforts of the Black Worker Justice Movement.

If you are interested in learning more information about UCLA CARE at Work, “We Gone Be Alright: Developing the Next Generation of Black Organizers”, or the Freedom Fellowship, please sign up for the course open house on Thursday, February 10th, 6:00pm (virtual) through the registration link.