UCLA alumnus Miguel Rodriguez’s career in labor advocacy draws from his lived experience as a non-traditional student and son of farmworkers from Oxnard, California. 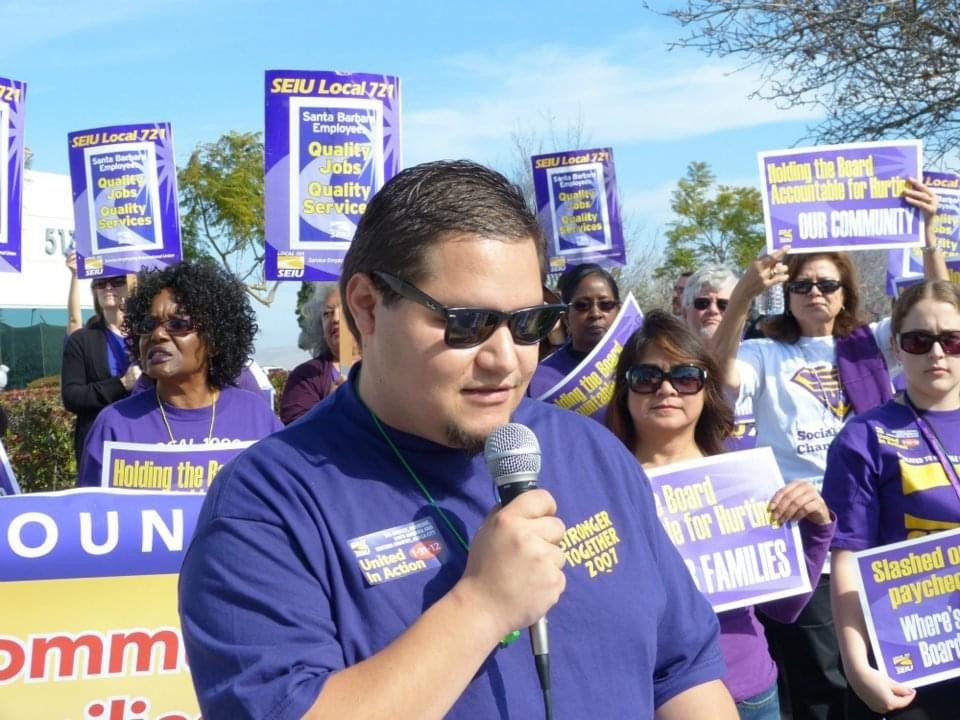 Rodriguez’s first exposure to the labor movement was as a young boy in Mexico City watching his neighbors, who were part of a labor union for musicians, participate in “Primero de Mayo” or May Day marches. After witnessing these mobilizations for worker rights, Rodriguez was inspired to channel that same energy in his organizing career that is now dedicated to dignifying the experiences of all workers.

Rodriguez and his family eventually migrated to Oxnard, California, where his parents earned a living as strawberry pickers. Although accepted into UCLA in 2001 prior to the passage of Assembly Bill 540 which would provide a gateway into higher education for undocumented students like himself, Rodriguez deferred admission due to the lack of financial aid.

In the meantime, he held different jobs, from being a restaurant waiter to painting houses. It was in these jobs that Rodriguez witnessed labor injustices impacting low-wage service workers, which solidified his passion for contributing to the labor movement. During this time, Rodriguez also received training through the Gamaliel Foundation National Network which trained Barack Obama, among others, on how to mobilize around civil and labor rights.

When Rodriguez finally enrolled to attend UCLA in 2014, he was eager to connect with the labor studies program.

“I really saw that throughout my life I had been [receiving] a labor education,” he said. “Coming to UCLA as a 30-some year old, non-traditional transfer, I [could] finally get to know the academics who are writing about this work, who are seeing the impact of my work happen throughout the last five to ten years.”

Recalling the most impactful experience in the labor studies program, Rodriguez shares the personal connection he felt in labor studies professor Gaspar Rivera Salgado’s class about the history and struggles of farmworkers across Mexico and the United States, including in his hometown of Oxnard.

During class lectures, he learned of a company in his local community that was exploiting migrant workers. Wanting to make a difference, Rodriguez took it upon himself to help plan an action that ultimately resulted in positive change for the workers.

“To be able to connect all of that from this conversation with a professor who was talking about my hometown and its contributions to the labor movement, and to be a student with these skills and say, ‘hey, let’s take this beyond the classroom,’ was awesome,” said Rodriguez.

“Miguel’s example of taking action in his community after learning about workers experiencing injustice in my class is very inspiring. As a teacher you look forward to moments like this and students like him,” said Rivera-Salgado. “Miguel is a great example of a student coupling the knowledge from our courses in labor studies with his passion to make an actionable difference beyond the classroom.”

Upon graduating and continuing his professional career, Rodriguez credits his minor in labor studies education as a key to opening several doors, especially in the social justice field.

Shortly after his time at UCLA, Rodriguez was recruited to work with Ventura County Behavioral Health, where he helped design and implement a mental health services program to serve the Latinx population in Ventura County, outreaching to many farmworkers in particular.

Currently he serves as the Community Outreach Manager for The Port of Hueneme, where he addresses public concerns of community members living around the port who oftentimes are impacted by its operations, such as high levels of air emissions brought into the community through diesel trucks and ships entering the port.

His current role allows him to bridge his interests in labor studies, labor policy and working with people on the ground. He holds meetings with union members, trade members, and port workers to learn about their needs. He then engages the Port of Hueneme in corporate philanthropy through developing social programs and resources for port workers and the surrounding community.

“The work that I do is avant-garde; no one has done this type of equitable work in the [maritime] industry,” said Rodriguez. “I am using my skills and my education to build upon this exterior labor culture that has only been available for longshoremen and service employees. So, bridging that with the outside community to have a conversation about supporting each other’s efforts and bringing everyone to the table–it’s a dream job!”