Sandra Serrano-Cañete: A unique thread in the fabric of UCLA Labor Studies program

Soon-to-be labor studies graduate leans on her identities as a worker, survivor and mother to guide her forward. 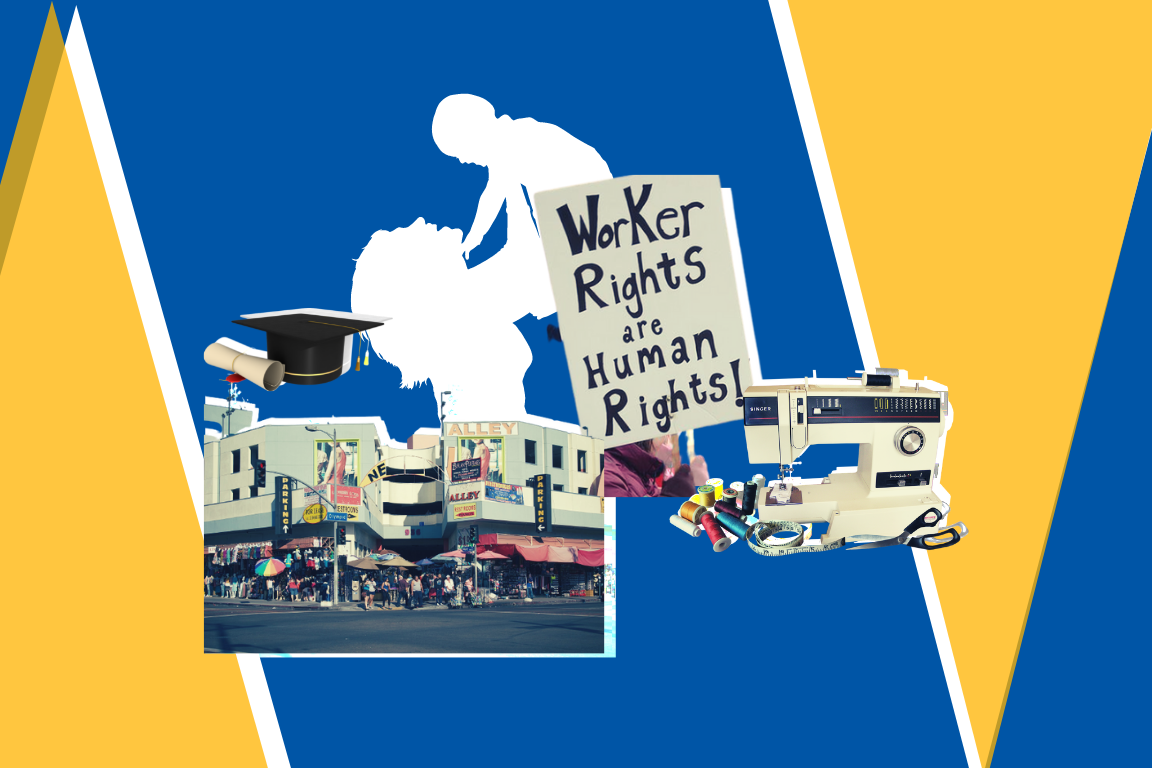 This story is part of our 2022 Labor Studies Graduation Stories series.

Sandra Serrano-Cañete was born in a small, Nahuatl-speaking town in Mexico, where her father was in charge of land distribution and organized to protect farmers from having their land taken unfairly from them.

At a young age, she immigrated to the United States with her family. Being an undocumented student at a large public school, Serrano-Cañete felt that she fell between the cracks and after a life-changing accident in her family, she was propelled directly into the workforce after high school.

Her years working in the Los Angeles Fashion District–a commercial district located in downtown L.A.where wholesalers and retail customers alike can find a near-infinite supply of cheap merchandise produced by thousands of often undocumented and exploited, mostly female workers–continue to be integral to everything she does now as a researcher, organizer and student.

Aside from holding her working class background near to her heart, Serrano-Cañete shares that her core identities include being a mother and a survivor of domestic abuse. In 2017, she left her abusive marriage and set out to accomplish her own goals.

Sandra shares what coming out of this relationship was like, and how leaving that relationship behind gave her the room she needed to flourish. “I just had so much energy and so much space in my head to be able to think about other things other than surviving or, you know, having a good week where there’s no abuse.”

Nevertheless, abusive relationships, Sandra notes, can leave lasting impacts, and she struggled with self-confidence as she applied to transfer into a 4-year university. She credits her co-workers and supervisors at the time with pushing her to apply, and changing her life in doing so, as she was accepted to UCLA, a top-ranked public university in the United States.

Although she was admitted into UCLA with a different major, she discovered labor studies and realized that she wanted to work in a field that reflected her experiences of coming from a working-class background.

As a child, her father would often bring work home from his job as a garment worker, which resulted in the entire family trimming thread until the early hours of the morning for a few extra dollars. “He knew that we were children and he knew that we needed to go to sleep, but he really needed that support,” recalls Serrano-Cañete.

Years later, she had that same experience.

“Working at the fashion alleys, I understood exactly what it feels like to just be so exhausted, to just feel ill after the day and having to go back and do the same thing the next day.”

These experiences were then reflected in the in the labor studies program classes she was taking  as students learned about the hardships of workers and how to stand in solidarity with them.

“I see my family’s experiences in labor studies,” she said.

In 2021, Serrano-Cañete became involved in the UCLA Labor Center’s Workers and Learners research project, where she conducted research on working students across Los Angeles County that shared the difficulties of attending school while working in the frontlines during a pandemic.

This community-based research, Sandra says, opened her eyes to the importance of community input and basing programming off  the responses and concerns of community members. Not only does she conduct research on the experiences of workers in order to advocate for them, but she also reflects on her own experiences, allowing them to guide her on her journey towards building a better world.

In addition to being a full-time student, Sandra works as a community outreach educator that helps mothers who are looking to become students. Within this role, she works directly with these mothers and shared that “they see themselves in [her] and [she] sees [herself] in them too.”

However, balancing motherhood while working and adding school to the mix has not been easy for her. She reveals having struggled in the past to sacrifice time with her child.

“It is a battle of all of those identities–trying to make sure that one doesn’t get all the attention,” she said.

Soon, Serrano-Cañete aspires to enter a career that will allow for more flexibility. Her ultimate goal is to become a high school counselor, inspired by the years she spent in high school feeling overlooked by the system.

Upon graduation, Sandra plans to pursue a masters degree in social work with an emphasis in schools, while spending summers with her daughter. Fueled by her father’s contribution to the labor movement, she hopes to push forward the next generation of students like her–a perfect blend of the values she holds near as an organizer and a mother.