Christina Maria Honoré discusses her time as a We Gon’ Be Alright student and shares her experience below. 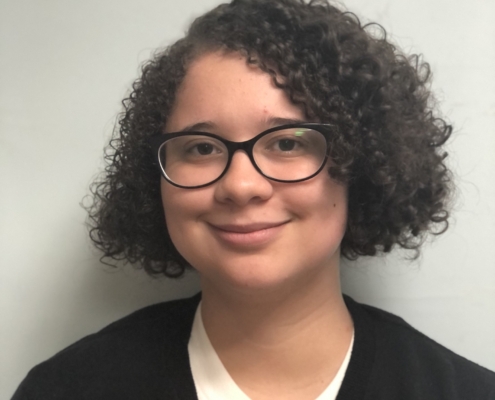 From New Orleans, Louisiana, Christina Maria Honoré is a UCLA alumna with a bachelor of science in neuroscience and a minor in African American Studies. During her senior year, Honoré engaged in the field of Black worker organizing by participating in the We Gon’ Be Alright: Developing the Next Generation of Black Organizers class. She believes that labor organizing is a valuable and important experience in order to advance worker rights.

What made you want to apply for the We Gon’ Be Alright: Developing the Next Generation of Black Organizers class?

I was a fourth-year student preparing to graduate with a minor in African American studies, and I just needed two classes left to meet the unit requirement and I was really struggling with what to pick because most of the classes that caught my eye initially were taken up. There were only a few spots in each class and one of the only courses left was the We Gon’ Be Alright course, which I hadn’t even heard of up until that point.

But when I read the course description, I saw that we were going to be A) learning about the history of labor organizing and B) actually becoming involved in the process, meeting with community leaders, and getting involved in projects that they’re working on – I was pretty much immediately hooked. It was something that had been kind of like sitting in the back of my mind for a while but I hadn’t really had the opportunity to find myself getting involved in it. So when I found out about the course, I thought this is a perfect opportunity for me to learn and get experience so I enrolled in the course.

What was your experience participating in the We Gon’ Be Alright Class?

We got to meet with guest speakers from a bunch of different organizations and the one [experience] that really stands out in my memory is when Chris Smalls was invited to speak to our class. That was a very memorable and enlightening day. Most of the history went over things that I was already consciously aware of but the way it was put together in the course made me realize the significance of Black people having to lead labor organizations throughout the history of the United States, as well as the sheer presence that Black workers have had in L.A.

The city tour was one of the highlights of the course because it took me to areas of the city that I had occasionally visited but hadn’t quite realized the historical significance of it and not to mention the opportunity to work with the other students at L.A. Trade Tech. I had never been to their campus before and although our time together was limited due to the pandemic, making most of the course virtual, I enjoyed working with them greatly.

If I had to sum up the overall experience of what I learned in this course, it was that even as racism became less legally justifiable and prominent in the workspace, it’s still very present, and very much defines the Black worker experience. A lot of [recent] major strides in the labor movement have been due to the efforts of Black organizers [and] Black workers, and even though their efforts are not entirely recognized and not always acknowledged, they are still integral to these movements.

Before entering the class, I hadn’t exactly considered what my future in regard to organizing would be. I was under the very mistaken impression that, as someone who plans on becoming a doctor and entering the medical field, those sorts of things would not exactly be applicable to me because I hadn’t heard very much in the way of doctors or other medical workers forming unions, going on strikes and being activists within the workplace. This class, especially the portions in which we focused on the way Black frontline workers were receiving the brunt of the burden of the COVID-19 pandemic, sort of opened my eyes to the fact that I do have a stake in this. I can’t just support the movement from the background and I need to learn how to actually make a difference within my field and for workers as a whole because as someone who will be holding the health of people in my hands, I’m going to be working with a lot of these workers.

How do you plan to integrate your learnings into your future plans?

I have the blessing and luck of going to UCSF School of Medicine, where there are a surprising amount of Black students in my year. I have a lot of support and a lot of solidarity with my classmates. Now that I am aware of my responsibility as someone who will be working in the field of medicine, and what I can do to organize labor. I will be doing more research into what Black workers have been doing in the field, what other doctors have been doing in the field, what needs to be improved upon, and what we, as future medical providers, can do for ourselves, for other Black doctors and for other workers who will be under our care.

I’ve been made aware of a growing union of doctors and nurses, and I’ve also been unfortunately made aware of some of the poor mental health that resulted from these stresses that have been placed on a lot of health care professionals not just due to the pandemic, but due to the state of healthcare in this country in general. I will be doing A) more research on what I can do, what has already been done, and B) working with my peers to work towards a better future.

Why is it essential for more Black students to learn about labor equity and organizing?

I’ve definitely noticed a trend among people of my generation to have this mindset that we’re aware that things aren’t as good as they should be, and that there are definitely better working conditions that could be had but there’s this sort of learned helplessness. They think this is the way things are and there’s nothing that can be done about it. It can definitely feel that way with a bunch of union busting out there but I think the things that I’ve learned in this course [have] given me a new sense of hope and a better idea of what can be done.

Prior to beginning the course, the Amazon Union had not been formed yet and I kind of saw it as one of those things that were just probably far off in the future and unlikely to happen any time soon because Amazon was this “big, bad corporation” and the workers were suffering under their rules. However, despite the challenges, the Amazon Union was formed and Chris Smalls was at the head of it. We got a chance to hear from him on how it happened, and it was very much a wake-up call that things can be done, things should be done, and people our age are making it happen. Since then I’ve seen other [workers from] big companies I wasn’t expecting to [establish] unions–such as Starbucks for example–which is making good progress, despite the counter efforts of the higher-ups at that corporation. 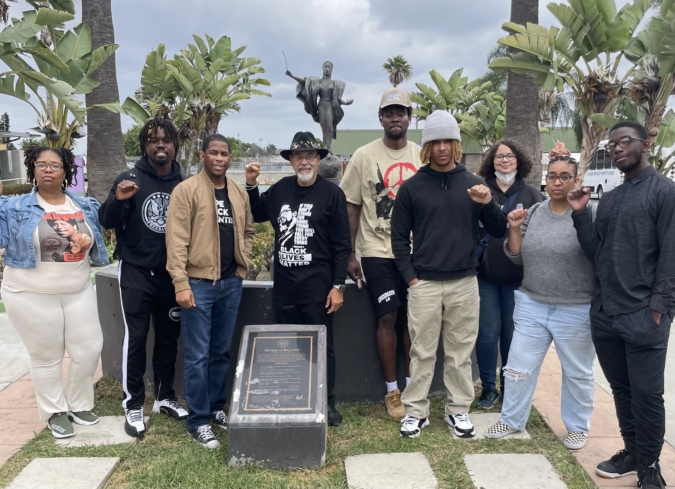 We Gon Be Alright students posing for a photo during the South LA Tour.