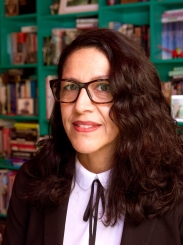 Virginia Espino is a native daughter of California, born and raised in northeastern Los Angeles. She is an oral and public historian whose research focuses on health activism, motherhood and the varied uses of public space. She earned her PhD from Arizona State University writing about population control politics and reproductive injustice during the 1970s.

As the Series Leader for Latina and Latino History at UCLA's Center for Oral History Research she developed oral history projects around civil rights struggles that document the role of the California Latina/o community in creating social change and make up an invaluable archival collection accessible to scholars and the public at large. Her research has been published in the Chicano Studies Journal. Her investigation of the history of coercive sterilization at the Los Angeles-USC Medical Center provided the impetus for the documentary film, No Más Bebés/No More Babies, for which she is a Producer and Lead Historian.