This story is part of our 2021 Labor Studies Graduation Stories series. Julio Sagastume will be one of the graduating student speakers at the upcoming Labor Studies Virtual Commencement Celebration this Friday, June 11.

Julio unites North and South campus—he is both a scientist and humanist.

Sagastume came to UCLA in 2017, but his interests were shaped at a young age when he began providing care for his sisters who have special needs, including his youngest sister who was born prematurely.

“The birth of my sister was a huge motivating factor,” he said. “After I was done with high school…I would walk over to see her since the hospital was close to my school, and that experience really motivated me to ultimately pursue medicine.”

After taking an introductory labor studies course that explores work, labor, and power, he was captivated by the curriculum and the collaborative environment he found in labor studies which helped ease his initial apprehension as a first-generation college student pursuing science. 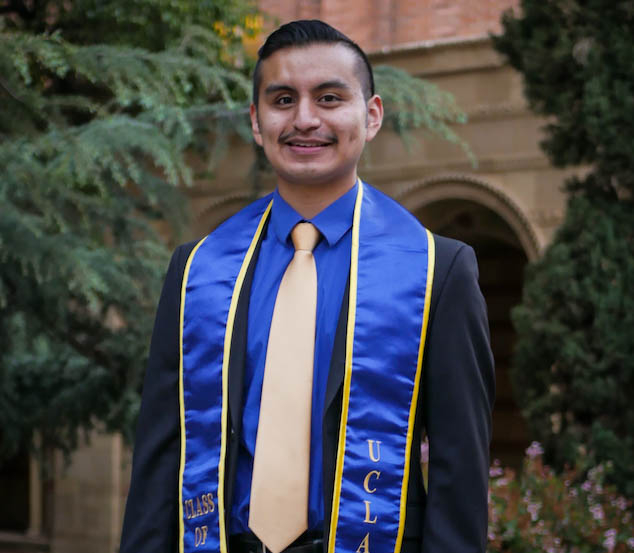 In turn, he decided to combine his interests. He declared a labor studies major while continuing to complete pre-med courses— an uncommon path since pre-med students generally choose science-related majors to fulfill their medical school prerequisites more quickly.

“I began thinking a lot about medicine and incorporating the labor studies background because especially in STEM and in science, a lot of people only like taking a certain perspective, because they think it’s the absolute perspective. But there’s so many other interesting and very instrumental backgrounds that people aren’t considering when it comes to treating people and medicine.”

While at UCLA, he also joined COPE Health Scholars, a program that places students in clinical and administrative health care settings that allow them to become an integral part of the care delivery team. In this role, he witnessed real-life medical examples of the concepts he was learning about in his labor studies classes.

Namely, he recalled the story of an expectant mother in labor who was facing a lot of uncertainty since she was undocumented, uninsured, and unable to interact with the English-speaking medical team during moments when communication and connection were crucial. Sagastume, who is bilingual, learned that the patient had been working as a domestic worker up until the point of delivery.

He says he recognized the danger but was not surprised by the patient’s decision to continue working so close to her delivery date since informal workers are often paid low-wages, don’t receive benefits, and can’t afford to take days off work—topics he explored in his labor studies courses. Moreover, he’s seen his mother and relatives navigate informal work settings so he understands workers make difficult choices rooted in necessity to provide for their families.

To his surprise, he noticed that the physicians were puzzled by the fact that the patient was not on maternity leave.

“I think they’d never seen [informal work] before, they’re used to seeing that you have to fill out an application and [submit] a resume, I don’t think they understand that a lot of the employment that these mothers and Latina women engage in — it’s kind of invisible like under-the-table work,” he said.

In a participatory research class Labor Summer Research Program (LSRP), he formed part of a research team that investigated the social, economic, and political context impacting students who work and attend college in L.A. County.

The course culminated with the release of: “Unseen Costs: The Experiences of Workers and Learners in Los Angeles County,” a study that highlighted the numerous demands students are juggling while also working. Recently, this research team also considered the added complexities facing working students during the pandemic.

“I have been inspired by Julio’s passion and openness to learning and exploring the world of work and the struggles of working people,” said Janna Shadduck-Hérnandez, labor studies lecturer and Labor Center project director who is co-leading this research initiative. “He is a beautiful example of a UCLA labor studies major who I am certain will be a pioneer in making change to improve the conditions for workers and their families.”

Among his most memorable courses, Sagastume points to the highly-recognized “Nonviolence and Social Movements” class taught by civil rights and workers’ rights icon, Reverend James Lawson Jr. who worked closely with Dr. Martin Luther King Jr. in the 1960s.

He said the class “really got the gears turning” and led him to supporting worker causes on campus.

“I’ve been able to participate in campaigns. I’ve been able to go on union strikes with employees at UCLA. Whereas a lot of students dream of making a difference after they get their diploma, I’m actually making that difference while being a student. So it’s a huge, very awesome experience.”

Conversely, in his “Storytelling for Activists” class, he contributed his unique scientific background to class discussions.

“At the conclusion of our course, Julio used the first law of thermodynamics as a metaphor for the exchange of energy that happens in activism and organizing. Rather than seeing storytelling as a transaction between teller and listener, Julio described activist storytelling as energy that can neither be created nor destroyed,” said Gaffney.

Ultimately, Sagastume aspires to become a physician who understands and cares for patients who struggle to navigate a healthcare system that is often out of touch with their realities and make wider contributions to the field of public health and health policy.

For now, he awaits graduation day grateful for what he refers to as the “tight-knit family” he found in labor studies even during an isolating time for college students.

“Labor Studies offered opportunities for students to get to know faculty and meet other students. A few examples included luncheons, research presentations, and virtual hangouts. It was a very wholesome experience and very different from my pre-med classes.”

We invite you to join the UCLA Labor Studies Commencement Ceremony and to hear Sagastume’s graduation speech on Friday, June 11 at 12 p.m., here.