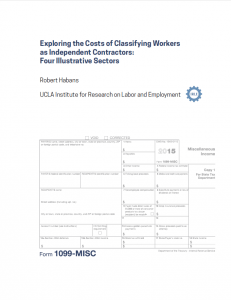 Many workers receive payment as independent contractors rather than as traditional employees. Such “1099” workers include both high-skilled professionals and those on the marginal fringes of the formal economy, both those who prefer flexible engagements and those who suer fraudulent misclassification, both long-standing occupations and new work relationships in the “sharing economy”. This report explores the business case for independent contractors by presenting scenarios for four dierent types of workers: truck transportation, home health care, web developers, and construction workers. Publicly available data is used to roughly quantify the non-wage and salary costs escaped by employers who engage workers as independent contractors rather than as wage-and-salary employees. This exploratory exercise illustrates how non-wage and salary costs dier across industries and occupations. For the scenarios presented here, independent contractor status saves businesses between 29 and 39 cents for every dollar of pay – possibly more for certain classes of construction workers. These estimates raise deeper questions regarding how these costs are shied onto workers and onto the public sector.