Home / Publications / From Coors to California: David Sickler and the New Working Class 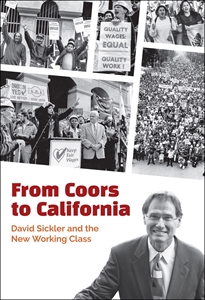 From Coors to California: David Sickler and the New Working Class

David Sickler has worked for fifty years as one of the most creative and successful union organizers in the country. Starting out working on an assembly line in Colorado’s Coors Brewery, Sickler went on to lead breakthrough campaigns that transformed the US labor movement and to become an influential labor advocate within Los Angeles City Hall.

This book captures some of Sickler’s historic campaign victories, from his leadership of the national Coors Boycott to unprecedented organizing drives with immigrant workers, often in direct challenge to the leadership of US labor. The revitalization of the California labor movement is integrally linked to this new wave of immigrant workers, and it was Sickler who built the foundation for organizing the new working class.