Home / Publications / Get To Work or Go To Jail: Workplace Rights Under Threat 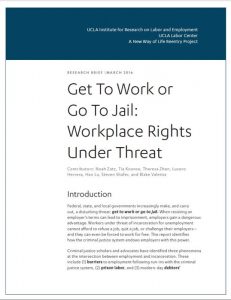 Get To Work or Go To Jail: Workplace Rights Under Threat

Federal, state, and local governments increasingly make, and carry out, a disturbing threat: get to work or go to jail. When resisting an employer’s terms can lead to imprisonment, employers gain a dangerous advantage. Workers under threat of incarceration for unemployment cannot afford to refuse a job, quit a job, or challenge their employers— and they can even be forced to work for free. This report identifies how the criminal justice system endows employers with this power. Criminal justice scholars and advocates have identified three phenomena at the intersection between employment and incarceration. These include (1) barriers to employment following run-ins with the criminal justice system, (2) prison labor, and (3) modern-day debtors’ which have gained increasing notoriety in recent years. This report examines a much less understood phenomenon, one we suggest carries drastic consequences for criminal justice reformers and labor advocates alike: what happens when the criminal justice system compels labor from unincarcerated workers and locks people into bad jobs? This threat—work or jail—can be invoked in several ways. We focus on three distinct but related sources of legal authority that enable government to make this threat. First, probation and parole require participants to seek and maintain employment as part of a set of standard conditions. Probationers and parolees perceived to violate these conditions may be incarcerated instead of remaining free. Second, courts may demand that people work when they are too poor to pay criminal justice debts from the fines, fees, and restitution imposed by the criminal justice system. Finally, courts may likewise order parents that are too poor to pay child support to find and maintain jobs or face jail as a consequence. Criminal justice debt and child support obligations cannot be erased in bankruptcy, and those who can’t pay face incarceration. Debtors can be ordered to find a job, a second or third job, or a even a betterpaying job if their present income leaves them unable to pay. Because little research exists on incarceration for failure to work, this report makes novel use of existing national survey datasets to produce new national estimates. Where possible, we provide estimates specific to California. We find: 1. The threat of jail is real. On any given day, roughly 9,000 people nationwide are incarcerated for violating a probation or parole requirement to hold a job. In major cities, 5% of all fathers are incarcerated for falling behind on child support. 2. These individuals are low-wage workers. Of those incarcerated solely for violating probation or parole requirements to pay court-ordered debts, two-thirds reported full-time work, earning on average less than $1,000 per month. Among fathers incarcerated for failing to pay child support, 95% worked in the previous year and 85% lived in or near poverty. 3. Many are forced to work for free. In Los Angeles alone, 50,000 - 100,000 people each year must perform unpaid, court-ordered community service often to work off criminal justice debt. State and municipal governments and nonprofits get a stream of free labor from individuals who may have to work for hundreds of hours. 4. People of color bear the brunt of these threats. Black and Latino people comprise two-thirds of those incarcerated solely for violating probation or parole conditions related to employment or payment of debt. African Americans fathers comprise nearly 80% of those incarcerated by the child support enforcement system and are incarcerated at a rate ten times higher than other fathers. These findings should cause criminal justice reformers to consider the implications of community service, work programs, and work requirements as alternatives to incarceration. When the alternative to incarceration is mandatory work, the alternative to debtors’ prison is debt peonage. So, too, should advocates of workers’ rights treat mass incarceration and criminal justice reform as labor issues.