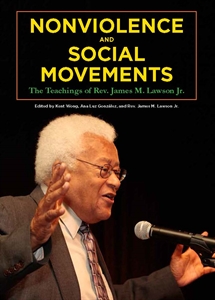 James Lawson Jr. first shook hands with Martin Luther King Jr. on February 6,1957, at Oberlin College in Ohio. Their conversation compelled Lawson to move to the South to join the emerging struggle for justice and dignity. On the eve of his assassination, King called Lawson “the leading theorist and strategist of nonviolence in the world.”

Lawson’s first nonviolent direct action campaign was in Nashville, where he led the series of lunch-counter sit-ins that successfully challenged segregation. The workshops that Lawson held in the philosophy and strategy of nonviolence trained a new generation of activists who subsequently organized path-breaking campaigns throughout the South, including the Freedom Rides. In California, Lawson has worked with hotel workers, janitors, home care workers, and undocumented immigrant youth to embrace nonviolence in historic organizing victories.

This publication emerged from a class taught by James Lawson, Kent Wong, Kelly Lytle Hernandez, and Ana Luz Gonzalez at UCLA, and it was written by students who were inspired by the class.