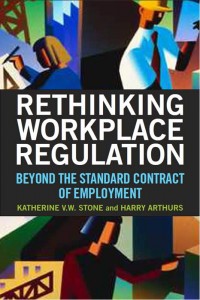 Rethinking Workplace Regulation: Beyond the Standard Contract of Employment

"During the middle third of the twentieth century, workers in most industrialized countries secured a substantial measure of job security, whether through legislation, contract or social practice. This “standard employment contract,” as it was known, became the foundation of an impressive array of rights and entitlements, including social insurance and pensions, protection against unsociable working conditions, and the right to bargain collectively. Recent changes in technology and the global economy, however, have dramatically eroded this traditional form of employment. Employers now value flexibility over stability, and increasingly hire employees for short-term or temporary work. Many countries have also repealed labor laws, relaxed employee protections, and reduced state-provided benefits. As the old system of worker protection declines, how can labor regulation be improved to protect workers? In Rethinking Workplace Regulation, nineteen leading scholars from ten countries and half a dozen disciplines present a sweeping tour of the latest policy experiments across the world that attempt to balance worker security and the new flexible employment paradigm.

Edited by noted socio-legal scholars Katherine V.W. Stone and Harry Arthurs, Rethinking Workplace Regulation presents case studies on new forms of dispute resolution, job training programs, social insurance and collective representation that could serve as policy models in the contemporary industrialized world. The volume leads with an intriguing set of essays on legal attempts to update the employment contract. For example, Bruno Caruso reports on efforts in the European Union to “constitutionalize” employment and other contracts to better preserve protective principles for workers and to extend their legal impact. The volume then turns to the field of labor relations, where promising regulatory strategies have emerged. Sociologist Jelle Visser offers a fresh assessment of the Dutch version of the ‘flexicurity’ model, which attempts to balance the rise in nonstandard employment with improved social protection by indexing the minimum wage and strengthening rights of access to health insurance, pensions, and training. Sociologist Ida Regalia provides an engaging account of experimental local and regional “pacts” in Italy and France that allow several employers to share temporary workers, thereby providing workers job security within the group rather than with an individual firm. The volume also illustrates the power of governments to influence labor market institutions. Legal scholars John Howe and Michael Rawling discuss Australia's innovative legislation on supply chains that holds companies at the top of the supply chain responsible for employment law violations of their subcontractors. Contributors also analyze ways in which more general social policy is being renegotiated in light of the changing nature of work. Kendra Strauss, a geographer, offers a wide-ranging comparative analysis of pension systems and calls for a new model that offers “flexible pensions for flexible workers.”

With its ambitious scope and broad inquiry, Rethinking Workplace Regulation illustrates the diverse innovations countries have developed to confront the policy challenges created by the changing nature of work. The experiments evaluated in this volume will provide inspiration and instruction for policymakers and advocates seeking to improve worker’s lives in this latest era of global capitalism."